Response to “Evidence Over Hysteria - COVID-19” by Aaron Ginn

I wasn’t planning on addressing this but since I’ve received it three times today asking if I’ve seen it and what I think (and I’ve also seen it posted), I’m going to do a “short” piece on it.

(I don’t have a ton of time so please forgive the brevity and lack of formality.)

In short, this ‘author’ is trying to use ‘data’ to let everyone know the MSM (and scientists, doctors and medical professionals) have it wrong. We are all over-reacting. We shouldn’t be closing schools, etc.

First, I have to hand it to him. He wrote a great narrative and it sounds very convincing to those who want to believe him – and it casts aspersions and creates a hint of doubt in peoples’ minds. Not only is this piece irresponsible, it’s also dangerous.

Also, keep in mind: he’s not a doctor, scientist or epidemiologist. He’s a 32-year-old self-described “growth hacker” who has grown up working in conservative politics. He has no credibility.

For what it’s worth, I’m none of the above either and I have no credibility.

In fairness, he did put this at the bottom of his dissertation, “You may ask yourself. Who is this guy? Who is this author? I’m a nobody. That is also the point. The average American feels utterly powerless right now.” I can relate to him on his last sentence as I feel most Americans can, especially right now.

So please read, form your own opinion, and more importantly don’t listen to me or him. Neither of us are experts.

In his article, one of his main points is that we’re looking at the data wrong.

Here is a quote, “Still, there is a massive blindspot with this type of graph. None of these charts are weighted on a per-capita basis. It treats every country as a single entity, as we will see this fails to tell us what is going on in several aspects.”

The next sub-head is, “On a per-capita basis, we shouldn’t be panicking”

This is the first primary fallacy and misdirection in his arguments. There are other fallacies that scientists and experts have debunked on other platforms.

First, he’s right in that the number of cases per million people is a very informative statistic relative to how much the virus has penetrated a country. But then he attempts to link that to “we’re doing better” than Italy, Germany, France, Spain, etc. It’s a false equation.

Simply put: the closer people are together, the greater chance of it spreading faster. In a dense, closely populated area the R0 will be higher and the disease will spread faster than a rural, sparsely populated area. (common sense, right?)

So, took to debunk this dangerous narrative, below is how to think about it along with the data. I’ll use Italy as our proxy and then include the data table for similar countries.

If America was as dense as Italy, we would have 1.6 BILLION people in our country which would make us the largest country in the world. Carrying the analogy forward, assuming a virus spreads in relative proportion to population density, we would expect the virus to have both a higher R0 and, as a % of the population, for it to penetrate almost 500% faster (which is what it’s doing as a % of overall population in other countries).

The RIGHT way to think about the spread is to view the US, not as one country, but rather as 50 separate little countries. The most densely packed cities (and states) are going to spread it at much faster pace than rural, sparsely populated areas. Hence why NYC, our most dense city, has become the epicenter with San Fran, Seattle, Boston, Chicago close behind.

In summary, the foundation of his argument and logic is built off of an incorrect and faulty premise which negates his entire thesis, let alone his dangerous and irresponsible recommendations.

I will end on good news though: because of the sparseness of America’s population, it serves as a natural and geographical inhibitor to an outbreak at the scale we’re seeing in Italy, UK, Spain, etc. Our densely populated cities will, because of urban density, get hit the hardest. Add in, although not scientifically relevant yet, that limited data does make it appear that warmer, more humid weather slows it down, we most likely have two natural defenses (land mass and time) working in our favor.

The measures many governors and mayors are taking to shut down and isolate people to get it under control are critical to get the R0 to R1 or less. Restriction of movement is the only thing that can slow it down and that is the #1 goal. There is no other option.

The more we can slow it down, the more “time we buy” for many things including:

I’m sure you’re all tired of hearing “flatten the curve” but it’s critical. Listen to the experts and what they’re telling us. Not me…and def not some 32-year-old political “growth hacker” from San Francisco.

–
A few other quick byte-sized comments on his piece:

His next headline is, “COVID-19 is spreading, but probably not accelerating” and he writes, “Daily growth rates declined over time across all countries regardless of particular policy solutions, such as shutting the borders or social distancing.” 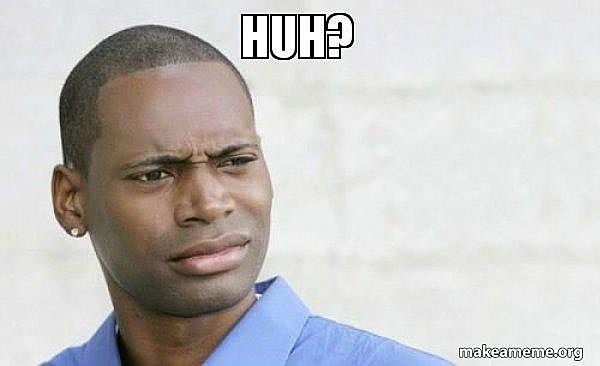 Although the whole piece is filled with misdirection and sleight of hands, this next statement is a doozy:

“Cases globally are increasing (it is a virus after all!), but beware of believing metrics designed to intentionally scare like “cases doubling”. These are typically small numbers over small numbers and sliced on a per-country basis. Globally, COVID-19’s growth rate is rather steady.

Viruses though don’t grow infinitely forever and forever. As with most things in nature, viruses follow a common pattern — a bell curve.”

No kidding. It’s the law of big numbers. Populations are finite numbers.

At some point, by definition, the number will start to decrease. Forget about doubling, look at the raw numbers by day (to be fair, this is more a case of finally testing people which we were late on versus a representation of actual new infections. The reporting data is at least a week or two behind the reality. Once we start catching up with tests, combined with our social distancing and quarantine policies, the daily numbers will start to decrease.) 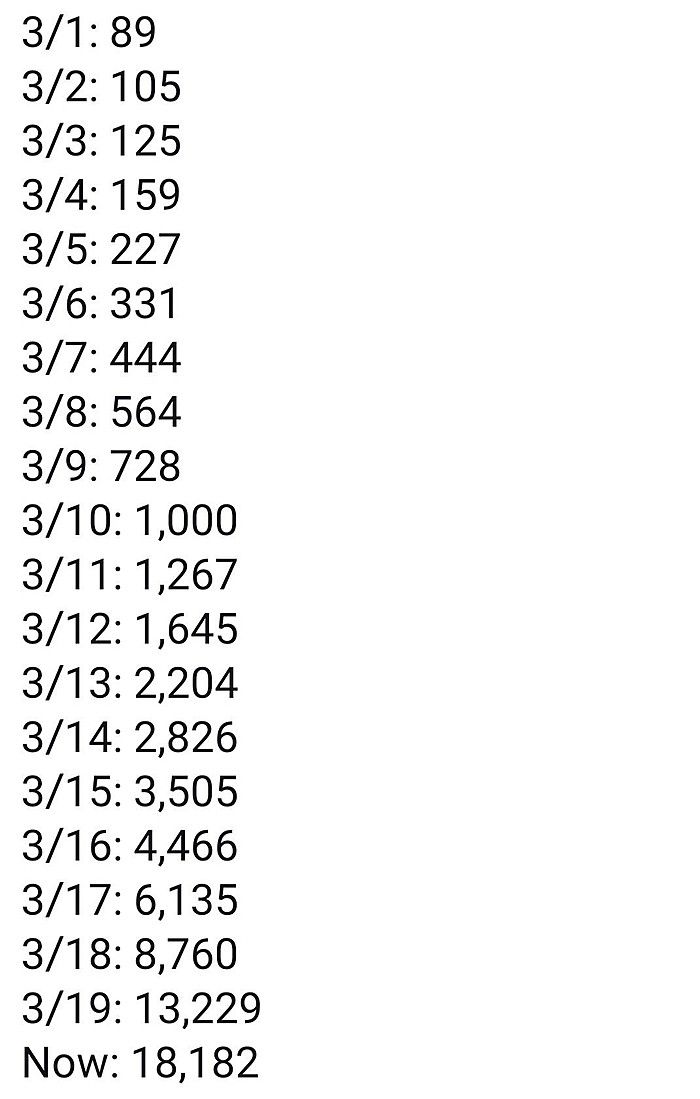 Then we move to this headline, “A low probability of catching COVID-19”.

His statement, “According to their report if you come in contact with someone who tests positive for COVID-19 you have a 1–5% chance of catching it as well.”

Once again, a sleight of hand, misdirection on this. That is true data. Back to the population density discussion. I’ll use an example: let’s assume I come in close contact with 200 people in the course of a week (I have 700 people at my company and spend time in a lot of restaurants…this is probably an understatement). If 5% of them are infected, that’s 10 people I came in contact with. Multiple the 1-5% by 10 and I’ve got anywhere from a 10% chance to 50% chance of contracting the virus – and that’s in one week, let alone over the course of 2-3 months. I don’t like my odds.

And then one of his next headlines is, “1% of cases will be severe”.

Wait for this one…because he follows it up with a graphic. He must assume that people are unable to read a simple pyramid chart. This is so absurd it’s almost comical.

He writes, “Looking at the whole funnel from top to bottom, ~1% of everyone who is tested for COVID-19 with the US will have a severe case that will require a hospital visit or long-term admission.” 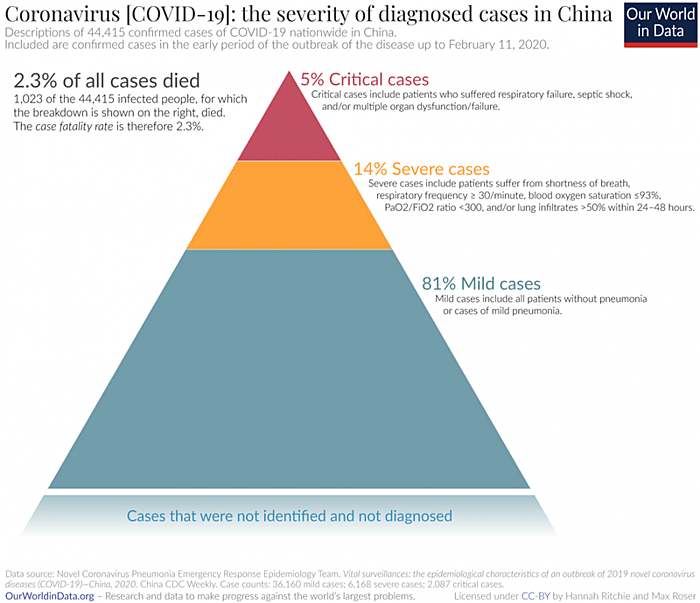 He says “only 1% will be severe” and then puts up a chart showing 19% of all cases were severe or critical. The chart also says 2.3% of all cases died. I’d love to understand how the 1.3% of people who died (above his 1%) aren’t considered severe cases?

Closing out, I will give him some props on his last sentence, “The health of the State will be even stronger with more Americans dependent on welfare, another trillion stimulus filled with pork for powerful friends, and a bailout for companies that charged us $200 change fees for nearly a decade. Washington DC will be fine. New York will still have all of the money in the world. Our communities will be left with nothing but a shadow of the longest bull market in the history of our country.”

This is the sin of all American crises where the average, and in this case, the most economically vulnerable of our citizens, will get raked over the coals. The corporations and political parties always seem to come out ahead while the little guy/gal get screwed.

My hope is this crisis opens up the door for a reset. The financial disparity between the wealthiest in our society and the corporations has achieved a level of unsustainability. This crisis will expose and lay naked the societal ills and economic depravity political leaders have foisted upon the majority of working Americans for the past 50 years.

Things have to change. Let’s get through this crisis first and then we need to make some serious changes for our future.

Recently, I had the pleasure of watching Won’t You Be My Neighbor. It is a wonderful biopic on the life of Fred “Mr.” Rogers. Today, I was rereading one of the best books I’ve ever read called You’ll See It When You Believe It by Dr.... Continue →